Looking at the technology applied to fins currently on the market, the best ones were based on aerofoil profiles, that were developed last century to minimise drag at high speeds by use of laminar flow. Some designs based on “nice looking shapes” by mixing and matching different profiles are a stab in the dark. This might work OK in some narrow range of conditions, but the rest of the time the performance is disappointing. Other designs are ruined by poor manufacturing tolerances.

You get what you pay for when it comes to manufacturing. The standard laminar flow aerofoil sections (NACA 5 series, e.g. 64A009) are defined by methods based on theories of fluid mechanics. More recent designs, such as the Eppler 836, are based on numerical panel methods, requiring a computer for calculation. The E836 and its scaled variants are commonly used since this was designed as a hydrofoil to start with. When these foils were developed, the use was mostly in high speed aeroplanes and hydrofoil boats. In both cases, the majority of the time in operation, the foil is working within a quite narrow load and speed (cruise conditions). With most of these applications flaps, ladders, and other techniques are used to enhance the low speed lift capability to allow it to take off to cruise speed.

These foils are also used extensively in yachting and marine applications: with rudders and keels they are attractive for their low drag at low angles of attack (neutral position) due to the design for extensive laminar flow. These foils are excellent at this task which is why they are still widely used more than 60 years on.

We had a look at the mechanical requirements of the fin, and realized that we were looking at a very different set of requirements to those of the applications previously mentioned. Rather than working mostly at one speed and load, we push our foils over a wide speed range and load range, without the practical ability to add flaps to enhance the low speed performance. Upwind and accelerating, we apply the highest loads, but these reduce as speeds increase when we accelerate off the wind (due to apparent wind going more side on to start with and then forward, but lighter when board speed passes the wind speed).

We developed software to accurately predict the maximum lift of a foil over speed.

> The standard foils used on most fins show a similar maximum load over speed, steadily increasing with speed. When the maximum lift point is reached, the lifting ability reduces, with the angle of attack increasing more suddenly as we go past this point, and drag increases significantly so we consider this the edge of performance envelope. “Stall” is one of the conditions that defines this maximum. You feel this when you try to push the fin at low speed and it doesn’t offer much resistance until you are going a bit faster, then suddenly it gets more “solid” under foot.

This linearly increasing maximum load with speed is actually the opposite of what we need, since it forces us to use a lot more surface area for low speed/acceleration phase performance than we need for high speed operation.

OUR MISSION WAS CLEAR

We have developed a new profile range using advanced CFD software developed in-house, to specifically match the conditions experienced by windsurfers, without any drag penalty over a conventional design.

See the following graph which compares standard foil designs with the Tribal design. 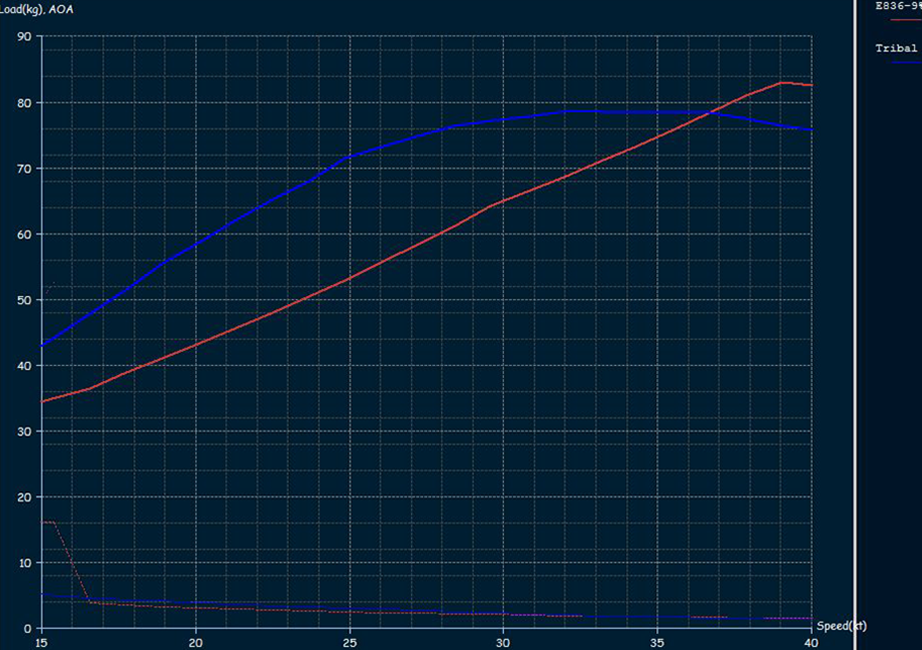 It shows clearly that the Tribal design offers significantly more power at the lower speeds for the same surface area, and holds the lift out to the highest speeds of the conventional design.What this means is that we can use a smaller Tribal fin compared to others, and since we have now dropped the surface area, the drag has also dropped in proportion! Alternatively, if we use the same size Tribal fin, you will find that it “turns on” much earlier, and has much less chance to spin-out in difficult conditions. So you get to speed much faster!

A clear example of this is in the direction the industry has taken with regard to large area speed fins. This big area is a necessity with the profiles they used. Our designs have a smaller area for the same length because we get more lift capability in that area, and lower drag at the highest speeds, whilst maintaining even greater stability.

This is really a breakthrough in designing profiles specifically for windsurfing needs. The design has been proven in testing over several years, before we introduced it into the Tribal line. 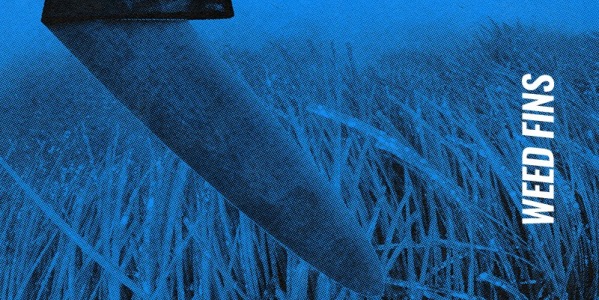 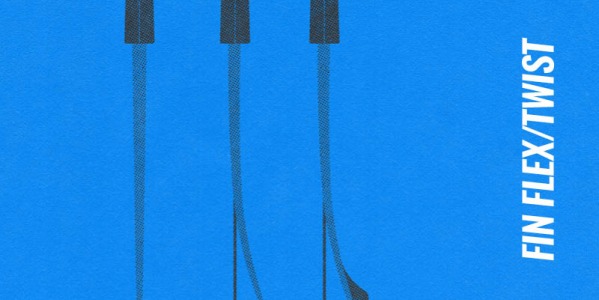