Spin out is the result of ventilation which occurs when an air channel develops between the low pressure (upwind) side of the fin to the surface. The water opens up behind the board leaving the fin dry on the upwind side, and unable to generate significant lift.

The trailing vortex has a low pressure core that extends behind the tail of the board. If it is strong enough it can pull air from the surface behind the tail, upstream through the vortex and onto the low pressure side of the fin causing sudden ventilation (AKA spin out). This mechanism was addressed in the ’90s with the popularity of flappers on the tail of wide (at the time) boards where the fin trailing edge was very close to the board tail. 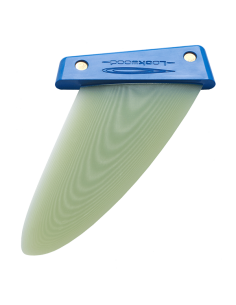 €229.00
KA Sail released the first ever working production asymmetric speed fin in 2006 with superb results. This fin was (and still is) an outstanding performer up to 50kts, claiming national records and holding GPSSS outright speeds right up until the canal in Luderitz opened up a new era in windsurfing records. The design brief at the time was to make a fin...

€229.00
The TRIBAL Speed range is based on windsurfing optimised profiles that give the biggest possible range for a given surface area, yet can still take the blowtorch to speed records!
You need to login or create account